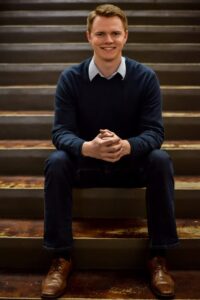 Dallin has loved making music since he was a young boy. He began playing the piano at the age of seven. In high school, he was involved in choir, where he would sing with and accompany them. Also in high school, he began taking organ lessons and fell in love with the instrument.

Dallin is currently a doctorate student at the University of Notre Dame, where he studies choral conducting in the Sacred Music Program. Before arriving at Notre Dame, Dallin received a Bachelor of Music degree in organ performance and Master of Music degree in choral conducting from Brigham Young University. He has performed in many locations including BYU Devotionals, freshman, sophomore, and junior recitals at BYU, the United States Air Force Academy Cadet Chapel (Colorado Springs, CO), St. John’s Cathedral (Boise, ID) and the Cathedral of the Madeleine (Salt Lake City, UT). Dallin has also had the opportunity to perform with the acclaimed Brigham Young University Singers on tours (Northern California and Nevada) and at the national convention of the American Choral Directors Association (Kansas City, MO, 2019).

As a church musician, Dallin has served in various roles. He has previously worked as organist and choir director at St. Mary’s Episcopal Church (2016-2020), and organ scholar at the Cathedral of the Madeleine (2017-2018). He is currently the choir director at Grace United Methodist Church in South Bend, IN. Along with working as a church musician, Dallin has taught collegiate courses in music theory and aural skills, conducting, organ playing, and assisted in conducting various choirs.

Dallin and his wife, Carlee, enjoy going to the theater, having game nights, and cooking.